Another Auto From the Wicked Vault

Here is 1 more card from the Wicked Vault. It is of my favorite Rays player, shortstop Jason Bartlett. JB hasn’t had too many autographed issues since joining the Rays, but when he was a future star with the Twinkies he had a ton. 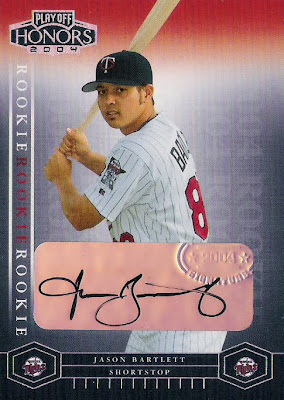 I think this is the 4th or 5th JB Twins auto that My Past Time…I Love It! has sent my way. The back of the card on this 2004 Playoff Honors autographed (and #ed to 800) offering touts Bartlett’s quick hands, bat control and ability as a table setter. I just wanted to use my break between shifts to it’s fullest to get a post up. I will be back later tonight. 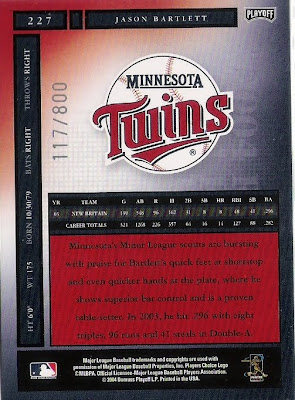 There is just a little bit of time left to vote for the next player I collect, it is a tight race between a couple of Hall of Famers right now. Thanks for the great autographed card Wicked! I still have a few more autos in the vault just dying to be shown off! Go Rays! Troll out.
Posted by Collective Troll at 5:03 PM