More Player Collection Ponderings and Some Goodies from Justin G of the Tampa Bay Sports Wasteland-Reader Input Required! Plus, A Contest is Coming!!!

Justin G from Tampa Bay Sports Wasteland blog has sent me a list of Jared Sandberg cards from Card Collector. This list shows 100 (a nice even number) cards total. It only lists 1 jersey relic card and I already have that… 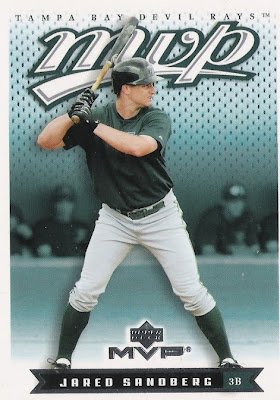 Of the 100 cards it lists, many are parallels. It looks like there are maybe 20 different cards and a whole bunch of parallel versions of them. He has several certified autos out there. From 1998 Bowman alone there are 12 different variations of his card including, regular, chrome, international and refractors of each one. There are also 3 different certified autos from that release. It is good to know what I am up against and I think I can handle gathering up ALL 100 of his cards. I need to dig them all out and create a have and needs list, but I believe that I has at least 15 different Sandberg cards. I would like to add the 1983 Topps, Donruss and Fleer trio of his uncle Ryne to the binder as well. I really wanted to find someone that I could realistically obtain EVERY single card of. With all that I lost I do still do own a 1/1 of CC. It is a magenta printing plate from 2009 Goodwins. 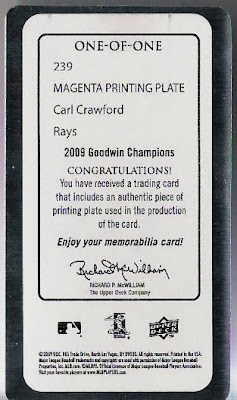 It is neat, I guess. I am happy to own it, but I know I will never have the other 3 one of ones from this set. Carl Crawford just is not realistic, nor is Roberto Clemente and Evan Longoria is not possible either. Of the other guys I collect like Jason Bartlett, Carlos Pena, Ben Zobrist, Akinori Iwamura, Pat Neshek and Brian Roberts; they all just have too many high priced, low numbered cards out there. 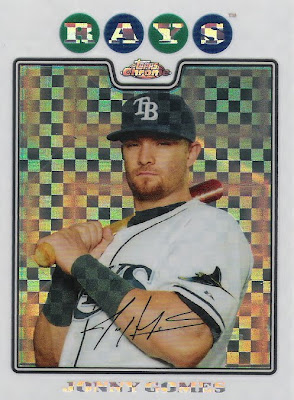 Jonny Gomes is more affordable to a certain extent, but again he has many low serial numbered cards that just aren’t available. I thought about adding Grant Balfour, but even he has a ton of cards. 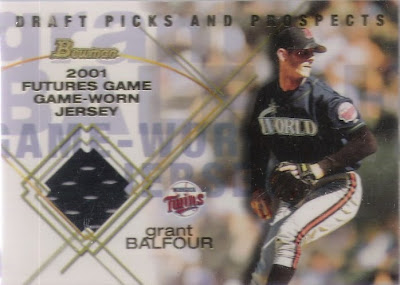 I think I can manage Sandberg. Any player who has 1/1 cards that has more than one fan can never be affordable or attainable. I hope to someday organize my Danny Tartabull cards and finish him off. I may never be able to afford his 1993 Finest Refractor, but I can probably track down everything else. Speaking of the Bull... 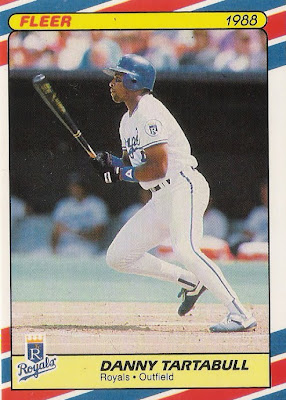 If anyone has some free time and could put together (from Beckett dot com) a complete list of his cards, I would REALLY appreciate it. Since I started the Tartabull PC when I was 10 years old and still have most of his cards, that collection is very special to me. I have been trying to think of someone else to add to my list that is actually attainable. There are plenty of players I follow, both past and present, but the main ones just have too many high-priced issues out there. Bill Mazeroski, Monte Irvin, Bert Blyleven, Rod Carew, Dave Winfield, Willie Stargell, Tim Raines, Joe Carter, Dave Parker and Larry Doby are all HOFers (or should be). 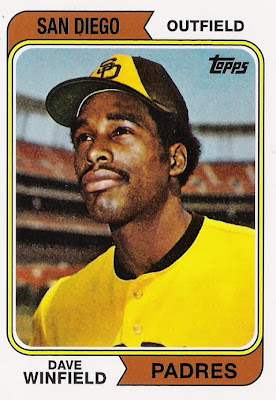 Anyway, I am open for suggestions. I would like to add a player from the 60s or 70s, someone from the 80s and 90s and 2000s, too. Maybe a current player. Someone who has around the same amount of cards as Jared Sandberg. At least 27, not more than 150 while remaining fairly affordable that is significant to whom I collect. That is former Negro Leaguers (or family of); Devil Rays, Pirates or Orioles, sometimes even White Sox or Senators. 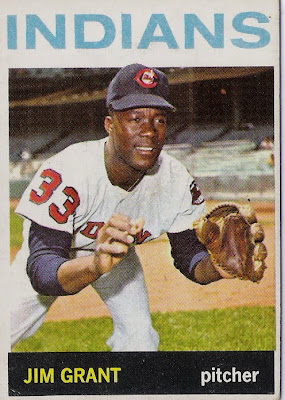 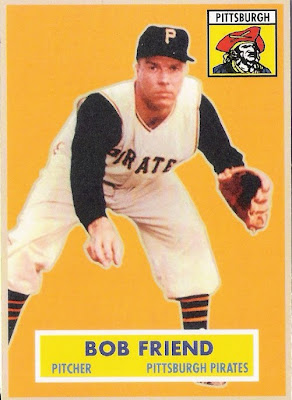 Elroy Face, Don Newcombe, Johnny Sain, Donn Clendenon and Junior Gilliam have always been favorites of mine, but how affordable are they? Remember, I am looking for total completion, but ideally would like a player with at least one current relic or certified auto, too. I am strongly considering Ben Grieve and or Quinton McCracken. Billy Pierce and Steve Carlton have always been high on my list, but after losing both their rookie cards last week, I don’t think I could go back. As for the new current player-I have received a few packages from Justin G this week. Today’s included a ton of awesome Evan Longoria cards. 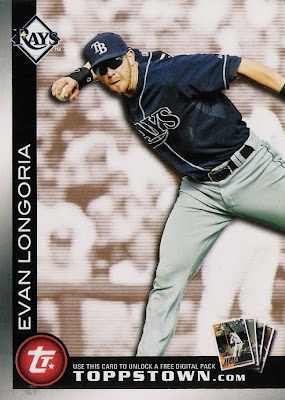 Some replaced ones that I had lost; a few were brand new to me. I haven’t scanned any yet though. Last week he sent a huge package of Pirates cards. 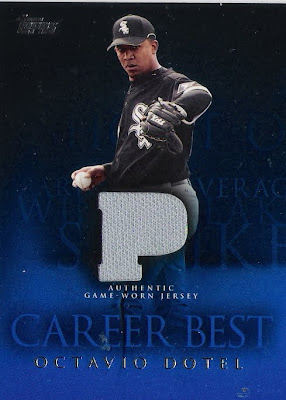 He also sent this Octavio Dotel Career Best jersey relic from 2009 Topps. I don’t think I will become a Dotel collector. I claimed the card to give to my little brother. He met Dotel last month, but we didn’t have any cards of him. Looking at his “career best” numbers on the back, Dotel has had a pretty nice career. The other card that stuck out in the package was this 2010 Topps Gold card of Garrett Jones. I am a sucker for Topps Gold. After losing almost all of my Rays gold cards I thought I was done with them forever, but it just took me getting 1 more to feel the urge to chase down every one I can. 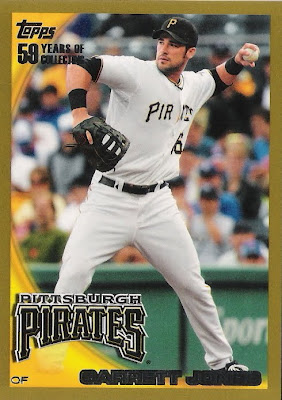 Anyway, this particular gold card is of Pirates right fielder Garrett Jones. I think that Jones is the real deal and has a few really solid seasons ahead of him. Unfortunately I am not the only one. I checked a few of the popular auction sites and his stuff is blowing up. I guess that eliminates him too. He is a great player and a super fan friendly guy. I am really glad he has finally got his shot. I guess that is it for now. All of this player collection madness was inspired by Justin G by the way. When he announced he was collecting Floyd Rayford who has 36 cards total. That seems attainable. I need a few more than that, but not too much. The ideal candidate would have no 1/1 cards, at least one relic and certified autograph card and an affordable rookie card with less than 200 total cards. Oh, and I have to like him, too! I made this post because I really would like some input and advice. Any comments you can share will be greatly appreciated. Thanks for the list Justin G. and for all of the great cards! Oh, as an end note, my local newspaper, the Bradenton Herald did see fit to send their worst reporter to our bout on Sunday. He left before the bout ended and seemed like he was drunk. It did make the front page (below the fold). Oh well, there is no such thing as bad press I guess. You can find the article HERE. Speaking of links (and we were) the Nitty Gritty Card of the Day is back! Has anyone noticed the new headers? One more thing to add... This blog is VERY CLOSE to having 100 followers. When this happens, ya know there will be a contest... The prize? A certified autograph of a Hall of Famer. It will be simple to enter, open to current followers only and there just might be prizes for 2nd and 3rd place, too. Stay tuned. Go Rays! Troll out!
Posted by Collective Troll at 10:59 PM