A Whole Lotta Hits, Showing off Some 2010 Topps 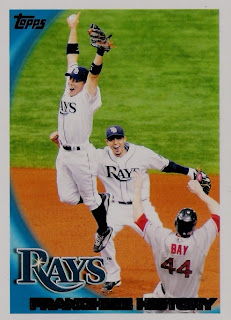 I have received every card that I had been waiting for of 2010 Topps, the dust has settled and every card is in its respective binder. Officially, I am 2 cards shy of finishing off the base set. Those pesky cards are numbers 78 and 99. I also thought I had the regular Topps Town set finished, but I still need card #6 of Ichiro. Like I had said before I won’t be chasing the When They Were Young set or Topps Town Gold. I do want to chase after Legendary Lineage and the Cards Your Mom Threw Out sets and probably the History and Tales of the Game subsets, too. Beyond the set I want to complete the Rays team set in base, gold, black and silk. I saw the sell sheet for 2010 Topps Series 2 and Jason Bartlett will have his first silk card-they are supposed to ship on May 24th. I ordered a box already! I have updated my needs and haves list. I have 80 dupes from the base set to trade, plus a handful of inserts. I keep on promising to show off some hits, but I haven’t had time… Here are a few Rays cards that I really like… These aren’t doubles by the way, so if you have a spare for my team collection or PC, please get in touch. I am not going to credit who sent what in this post, it was a team effort. Just showing off cards for now…From Legendary Lineage: I think everyone has made the complaint about players being paired with legends from other teams. It stinks. 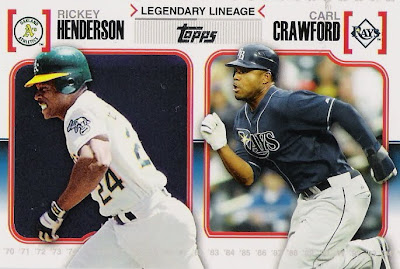 In the case of the Rays, I like these pairings. 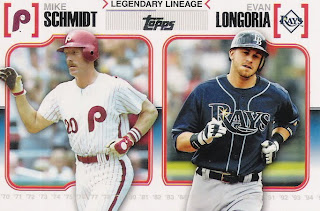 Carl Crawford with the best base stealer of all time and Evan Longoria paired up with one of the greatest third baseman ever.

Here is a trio of Rays base cards and then a card so nice that I had to show it twice! 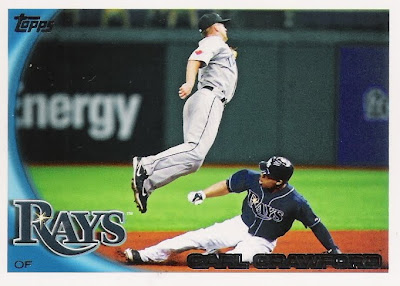 One of them is golden; I still need another one of them. 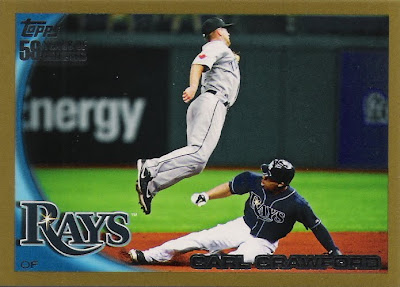 The other gold Rays card I have so far is David Price. 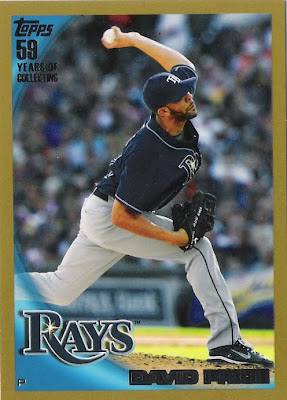 I am still waiting to get a black, #ed to 59 card of the Rays. Evan Longoria is all over this set. Here he is in the Topps Town set, regular and gold (I think) both. 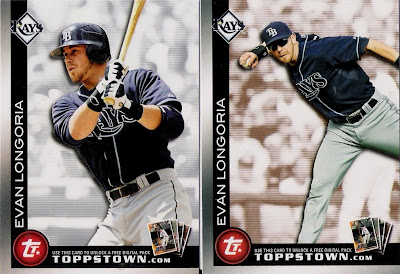 The first Rays relic I got from 2010 is a Longo, too. This is a Peak Performances bat relic card. The back celebrates Evan becoming the first ever rookie to homer in his first two postseason at bats. 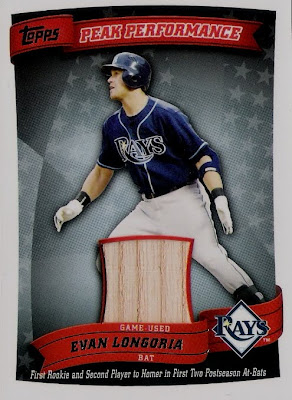 The other Longo card I have pulled is pretty ridiculous. It is an original back (1:24) card from the CYMTO series. 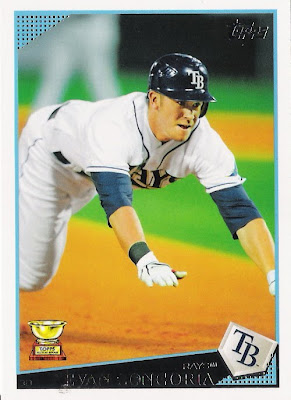 Yes, it is a 2009 card. Sheesh. My favorite card from the set so far is this one. It is the first Rays silk card in my collection and I LOVE IT! 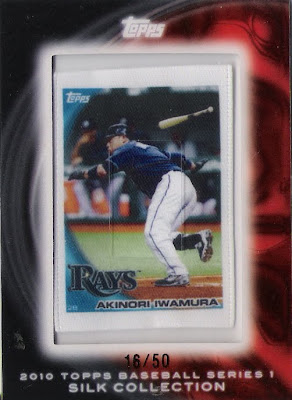 These things are too cool. It is numbered 16/50 and if you compare it side by side to his base card in the set, there is a slight difference… 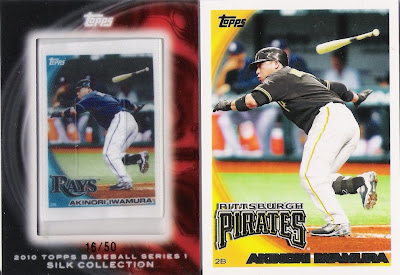 The last card I am going to show is of Carl Crawford. 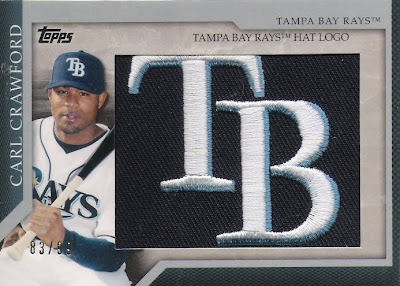 I am not keeping this one, it is on its way to another CC fan, but I just couldn’t resist taking a scan of it. I received a whole lot of cards here; I think it is only proper to share… That concludes this session of bringing out the hits, Tampa Bay Rays style. Please check my freshly updated want and trade list, it is totally up to date now. Get in touch if you have ANY Rays to trade. I have 8 different relics, 1 auto and a couple of gold cards and I want to chase EVERY single version of EVERY single Rays card in this set. Thanks for reading and thanks to Play at the Plate, Roll out the Barrel, Cards on Cards, Cardboard Junkie, Dogfaced Gremlin, Baseball Dad, Largo Frank, Texas Pete (from New Mexico) and anyone else who shared these awesome cards with me! Go Rays! Troll out.
Posted by Collective Troll at 9:19 AM