Okay, so another day and another delay on the contest. I PROMISE that it will begin tomorrow regardless. In an effort to make it up to my dear readers I am adding to the bounty. In addition to the previously mentioned Hall of Famer autographs, I will add one more HOF autograph that will not disappoint. I have also decided to add one more non-HoF auto, but a great auto nonetheless. 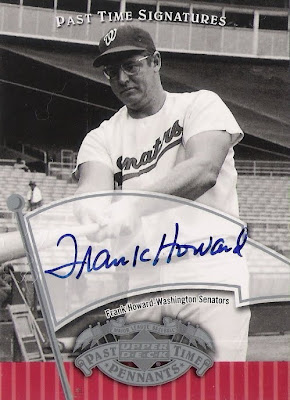 This certified auto of the Capital Punisher will now be added to the prize group when the contest commences tomorrow. Now, since I am in player collection limbo with my undecided new player, I am gonna hit the current player collections HARD. I am speaking of my Jared Sandberg and Danny Tartabull collections. I am confident that I can gather up EVERY single Sandberg card ever made. Tartabull may be a little more difficult, but I am gonna go down swinging with that one. Of my current PCs, I am still looking to build on the Carl Crawford, Jonny Gomes, Brian Roberts, Pat Neshek, Akinori Iwamura and Jason Bartlett collections. Yesterday I showed off another Bartlett auto from My Past Time I Love It!, today I am going to start with my first Bartlett relic, a 2009 Topps U&H All Star insert of JB. Embedded in this card is allegedly a piece of JB’s All Star workout jersey. 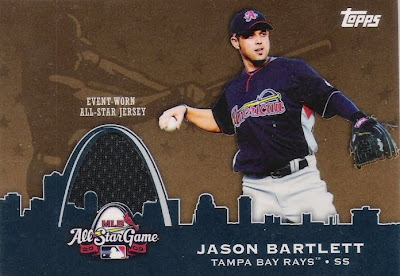 It isn’t quite a Rays relic, but its Rays era and it celebrates Bartlett making his first All Star appearance, plus the card is numbered to 50. Now, onto Danny Tartabull. This first card doesn’t look like much, but it was a tough pull back in 1993 that I never thought I would own. This is from the 1993 Topps Stadium Club set. 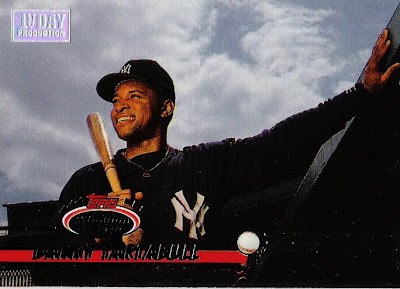 It is card #85 and shows my fav outfielder of my youth in a stupid Yankees uniform, but this card has a little stamp in the corner that says “1st Day Production”. Cards with this little stamp were one per box and I am really happy to add this. I think there are few more years of 1st Day cards that I still need, but I am on the right track. In addition to that ’93 Yankees card I also added a 1996 Leaf card showing the Bull as a member of the White Sox. The Bull had major career resurgence with the Sox in ’96. I know it was the live ball era, but as a fan I was thrilled to see Tartabull hit 27 long balls and drive in 102. 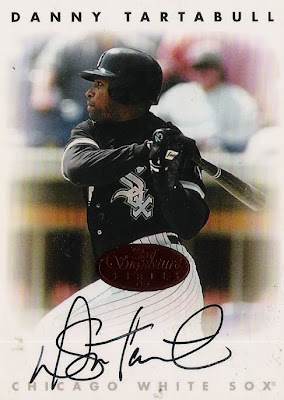 This card is special because it was from that time frame, but also because it is my first Tartabull certified autograph. It comes from the 1996 Leaf Signature Series which is really affordable and loaded with players who don’t have any other certified autos out there. Speaking of certified autos, I also added my first Jared Sandberg certified auto this week. 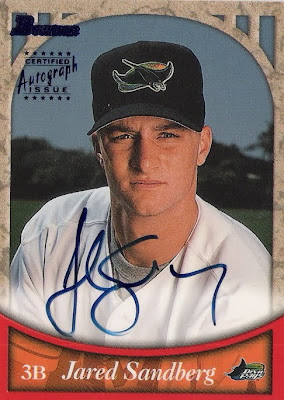 This card is from the 1999 Bowman set, card #BA57 with a nice bold blue signature across the front. Now I have officially completed the Trifecta for Sandberg, owning his rookie, a jersey relic and now a certified autograph. If I can find a bat relic, I will be ALL SET! I have been collecting Tartabull for 25 years now and I still don’t have the Trifecta of him, lacking a relic card. If anyone has ANY cards of Sandberg or Tartabull, please get in touch. I am still looking for a good idea to break the tie between Maz, Mad Dog and Doby, too. Off to work... That is all for now… Contest will be posted tomorrow, by hook or by crook! Thanks for reading! Go Rays! troll out.
Posted by Collective Troll at 3:19 PM