Quick post… I am considering a new player collection; I am actually considering a few of them. I will slowly unveil them. One player that I am certain that I would like to collect completely is former Devil Rays third baseman and current Rays minor league coach Jared Sandberg. Sandberg came up at a time when the D-Rays were the doormat of the league. He never fulfilled expectations of being an All Star, but he was a solid third baseman with some pop who was rushed to the big league level. He represented hope for the organization and he was a fan favorite and a very fan friendly player. He reads the blogs that we write and that makes him all right with me. 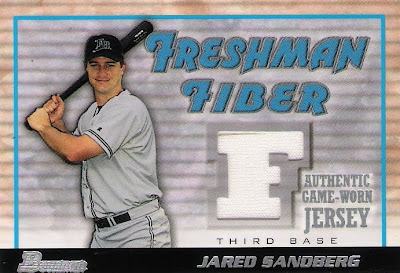 I just got my first Jared Sandberg relic in the mail today. I received this 1998 Team Best rookie card in the mail a few weeks back. 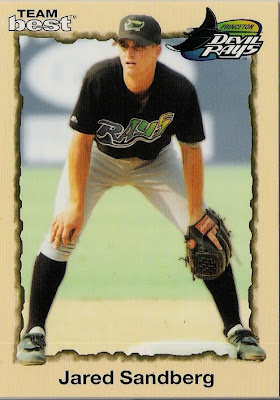 Does anyone know how or where I could get a list showing every card made of Sandberg? That’s all for now… Go Rays! Troll out.
Posted by Collective Troll at 12:56 AM