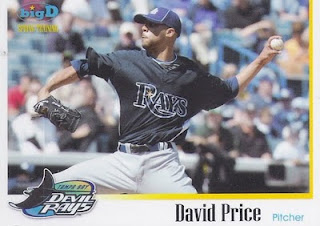 Before I start, if ya haven't entered the CONTEST yet, do it now... With that out of the way. My initiation into the world of Big D Cards began today...Lately I’ve been jealous. I admit it. I have been reading the other blogs the past few days I have seen amazing Big D Customs popping up all over the place. There was THIS awesome post and THIS awesome post showing off some really sweet customs. It seemed like Big D, AKA the Big Dude from the Hey That’s Mine blog had been a pretty busy card creator…  Oh yeah, those are pure awesome and as far as I know it is a 1/1. I generally despise 1/1 cards, UNLESS of course, I own them, then they are a-okay! It was my turn today… I got an envelope with the Big D logo on the return address. I was psyched! I was wondering what or who it would be. I was honestly hoping it wasn’t regular trade cards as I really wanted a custom of my own. I ripped open the envelope and found that they weren’t boring out Topps or Upper Deck cards; they were in fact, super awesome Big D Customs… As everyone else has already reported, these cards are nice. They are thick and glossy and totally one of a kind. I now have 3 different 1 of 1 cards of both Evan Longoria and David Price in my little collection. That is quite cool cuz I never even set out to collect those 2 guys… I was originally confused with the Devil Rays logo on them because neither guy ever played for the Devil Rays, but the more I have seen, I now know that all of his cards have a retro logo on them. Maybe it’s a licensing thing. Either way, they are pretty rad. The back of the card tells you these weren’t easy to make, so I do intend to treasure them and not leave them in an unlocked car. I would suggest heading over to Hey That’s Mine and beginning the ass kissing process right now! Thanks Big D! These rock. Oh, there is about 1 more day left to enter the contest, not many entries today, let’s change that! PS I ran out of time... I will show off the awesome Longo later... Go Rays! Troll out 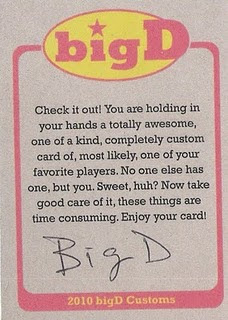 Posted by Collective Troll at 5:50 PM