I was planning on posting the vintage cards that I got from Project 1962 this morning, but I don’t have the scans with me and I thought I should mix it up a bit. The blogger kindness packages have been wondrously overwhelming and greatly appreciated. On Friday I got several and one of them came from the legendary Sewing Machine Guy. I have been reading his blog for a while now, but somehow we never had the occasion to trade. I wish he was around last year when I was swimming in Detroit Tigers relics that no one seemed to want, but I am sure those will come again as soon as I get the cash to start ripping again. On that topic, the First Annual Collective Troll Thank You Blog-O-Sphere Contest will go up next Tuesday evening (3-23-2010, mark your calendars!). I have already shown the Brooks Robinson autograph that will be awarded; the next card I am adding to the bounty is of none other than Mr. Tiger, Al Kaline. So yes, the CTTYBOS Contest now includes certified autographs of two of the finest ball players EVER…

Okay, back to this package. The Sewing Machine Guy sent a very nice note along with a healthy stack of Tampa Bay Rays cards. As usual I am short on time, so I am going to limit this post to just 8 of my favorite cards. I will start off with a few highlights from 2010 Topps Heritage. I have considered myself a huge fan of this release-I have completed 2007 and 2008 and am still hanging on and trying to finish off 2009 but I have yet to rip a single pack of 2010. I have been pretty jealous checking out so many of these cards on other blogs, but now I am the proud owner of some old school (looking) Rays. The 1961 design isn’t my favorite, but the level of photography versus the sets of the 1950s increased dramatically and that shows in this release. As much as I love the 2007 and 2008 Heritage sets, the goofy close-up pics have always irritated me. The classic look, no gloss finishes and portrait shots that include the entire player make it a winner with me. Anyway, here is a look at my first 3 Rays. As a spoiler alert, I got a few more after this package including some of the chromey variety that I will be showing off soon. Anyway, I will start off with the 2009 American League homerun champion, the Rays left-handed slugger Carlos Pena, card #216. 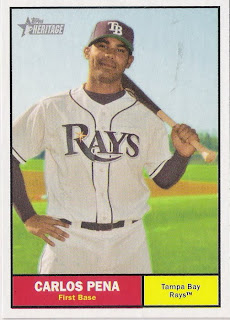 The back of the card mentions that Pena is the Rays only homerun champ (so far) and that he owns half of the clubs six 30-homerun seasons. Next up is my favorite rookie pitcher from Lake Wales, Florida, 24-year-old right-hander Wade Davis on card #298. The botc touts that Davis fanned the 1st four MLB batters he faced. 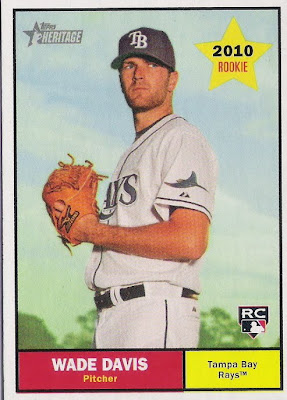 The final 2010 Heritage card I am gonna show off is of my favorite Ray, their All Star shortstop and probable lead-off batter, card# 399 of Jason Bartlett (a card soo nice I had to show it twice!). I haven’t read the short print list for this set, so I don’t know if any of these cards are SPs, but either way I am thrilled to have Bartlett’s card already. I am still trying to track down his 2009 SP. 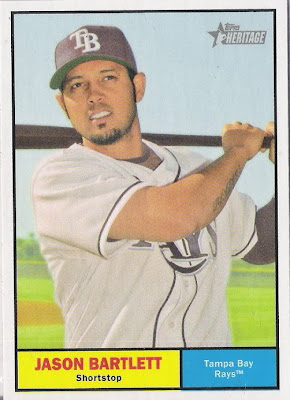 The botc touts that Bartlett batted .386 with runners in scoring position last year; he stole 30 bases in 37 attempts and jumped from 1 homer in 2008 to 14 in 2009. His .320 batting average last year is a Rays single season record. All mega impressive, but the real reason he is my favorite player is his glove and leadership on the field. It’s still up in the air as to who his double play partner will be in 2010, but with Longoria to his left and Pena to his right, the Rays will have a sharp team defensively. Speaking of Evan Longoria… 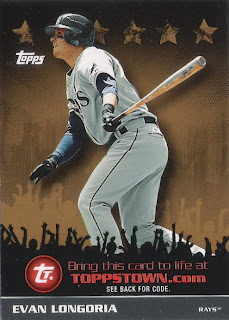 The Sewing Machine Guy sent a stack of Longos-I am only going to show off two for now, his Topps Town Gold from 2009, card #TTT5 and his black Topps Ticket to Stardom insert, card #TTS-10. 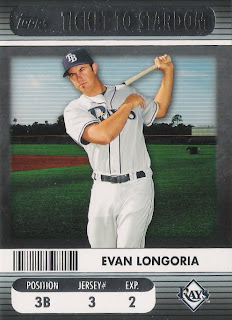 The next 3 cards will get progressively shinier. I will start off with a 2007 Bowman Chrome, card #BDPP55 of left-handed starter David Price. 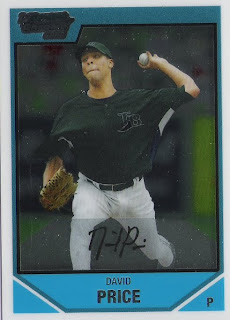 The back of the card shows off his stats at Vanderbilt University in 2007. He was 11-1 with a 2.63 ERA with 194 strikeouts in 133 innings. Many people have written David Price off after he didn’t dominate in his rookie season, but I seriously think this guy can be an All Star starter. Speaking of rookie pitchers with All Star potential, Jeff Niemann showed what he could do last year leading the staff in wins. 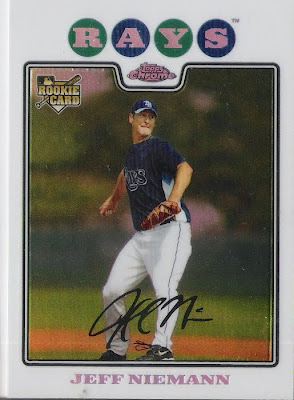 This is my first refractor of him (and I LOVE refractors!); it is card #192 from 2008 Topps. Speaking of refractors and 2008 Topps, the last card I am going to feature from the SMG is card #200 of Elliot Johnson, a young infielder who just celebrated his 26th birthday last Tuesday. 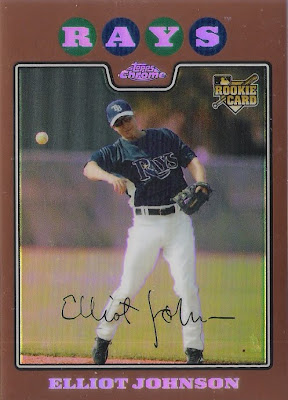 He is shown here in full refractorific glory. Bronze refractor to be exact, the kind with a serial number (079/599), yep it is pretty awesome. I am thrilled with these new additions to my collection and I owe the Sewing Machine Guy a HUGE thank you. Muchas gracias Larry! For all things Michigan (and not much about sewing) check out his blog right HERE. Thanks again SMG! Much more blogger kindness to come! Community Gum dot com is on deck... Go Rays! Troll out.
Posted by Collective Troll at 11:28 AM