Blown Away by Blogger Generosity! The Scott Kazmir and Yosemite Sam Edition 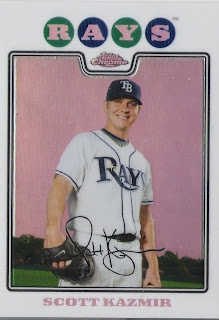 I just finished a post on my other blog about my Mom’s family, baseball and the first hero of my family, Tony Lazzeri, I hope you will check it out here. I have also started another website with a dot com address. Not sure if I will mention it here yet, hopefully folks will find it and enjoy it on their own. This will be the first Blogger Generosity post of many as my mailbox was full of goodies again today. I am really blown away by the kindness of the card-blogging community. You guys have raised my spirits immensely and really made me feel the love of our family. Thanks! I have no word yet on anything good, but I will keep you all posted. As for the contest, it will be up on Tuesday. Its gonna be a big one because I want to extend my thorough appreciation back to the blog-o-sphere. I showed off one HOF autograph, there will be at least one more. The Collective Troll has reached and passed the 100 follower mark and I want to thank all 103 of you for following! That makes me feel great and because of that there will be at least one additional autograph and a bunch of relics as well. There will probably 7 random winners with the first winner getting first choice, moving all the way down. I think everyone (who wins) will be very happy.
Okay, onto this post. Here are some of my newest Scott Kazmir cards. 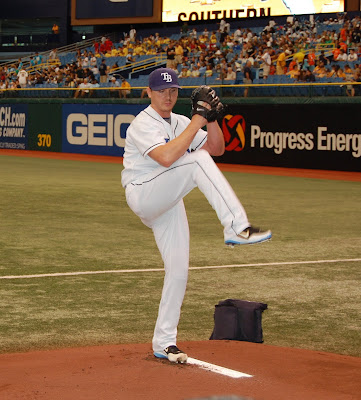 The first came a few months back from the legendary Rhubarb Runner as part of his entry into the Spring Break, Cards Gone Wild pack rip. This is going to finally happen next week. I will probably rip a box per day and post a few scans of the highlights and then a final card count tally per team. 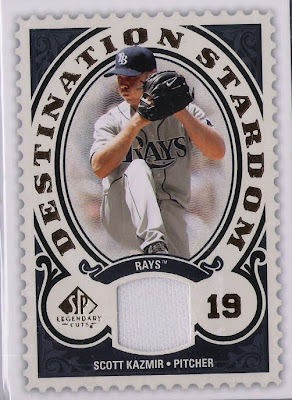 I hope y’all understand. Anyway, this is the awesome Kazmir relic that came from RR. He sent some other stuff, cool Rays and cards I needed for my 2010 Topps set and curiously a pair of these Frank Catalonto cards. 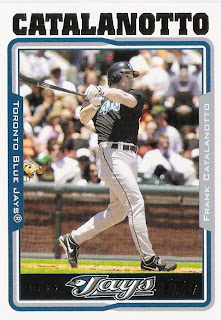 They were the first 2 cards I saw when I opened it and I was sure that I had been bipped. If I was, it was a little one. 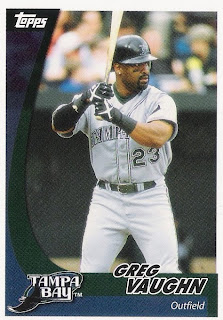 He followed it with a Post Greg Vaughn cuz ya can't miss a food issued card! I would like to show off the other stuff he sent, but I wanted to post his Kazmir card from Upper Deck SP because it fits in well with the next cards which all came from blog reader and friend Joe M. Joe is a Mike Piazza fan and we have traded before. He doesn’t have a blog (yet!) but is still thinking about it. 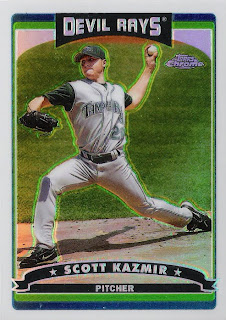 He is a great and generous trader though. I ran out of steam (actually Piazza cards) during our last trade, but he hooked me up anyway with 3 Rays autographs, Danny Tartabull, Negro League and basically everything I collect. He had one Rays autograph left, but we agreed that he would hold that back for a future trade. This week he decided that my wait was over and surprised me with all of these great Kazmir cards and a very cool drawing of an angry cow!. 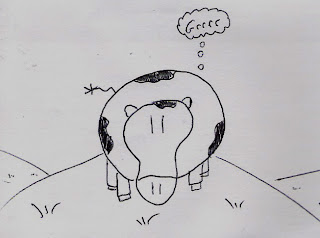 I am a huge fan of Kazmir. I never got into collecting him, but I will never turn down one of his cards... The year that he struck out 239 batters to lead the American League, my wife and I were going to at least 2 games a week and saw him pitch many times. He became one of her favs and he was on the mound the day I got to explain to her why fans hung signs that said “K” on them. 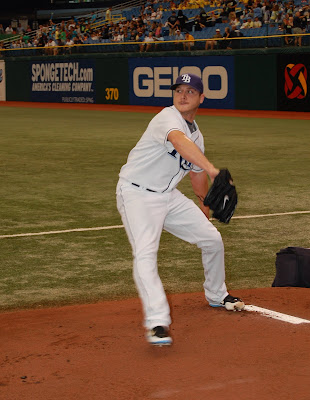 He put up a lot of those K signs with us in the audience. When my cousin Jon and his wife Kendra came to visit us in 2007 she had never been to a baseball game before. I was able to get tickets behind home plate for the 4 of us and we watched Kaz strike out 12 batters from about 25 feet behind the catcher. He doesn’t bring the heat as much as he used to, but the amount of movement he has on his 92 MPH fastball is amazing. He is brutal on lefties too. I don’t know if he will ever return to his 2007 form, but at 26 years of age, I think his best innings are still ahead of him. 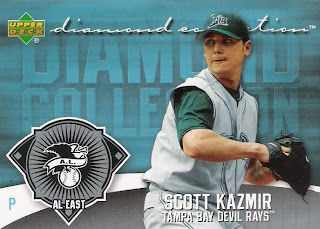 While he was recovering from injury last year, he spent time rehabbing with the Port Charlotte Stone Crabs (A) and I got to see him work out close up and also got to speak with him. He felt like he had yet to reach his peak and really wanted to stay and succeed with the Rays. Obviously he didn’t stay with the Rays-he was traded to the Los Angeles Angels in late August of last season for Sean Rodriguez (who is having an amazing spring!) . As an Angel Kaz was 2-2 with a 1.71 ERA in 6 starts to give him a total mark of 10-9 for the season. He pitched twice in the ALCS with little success allowing 5 runs in 4.2 innings of work. I look forward to seeing him pitch a full season in 2010. I don’t have the cards in front of me (my cards are staying at home from now on!) so I can’t list what they are, just look and enjoy and let each scan equal 1,000 words! 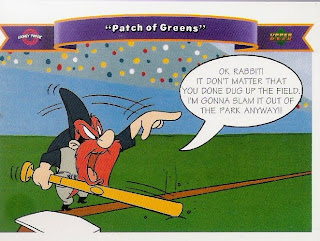 Amongst the Kaz cards Joe also included a Yosemite Sam card to make me laugh. I will share it with y’all and hope for the same result. 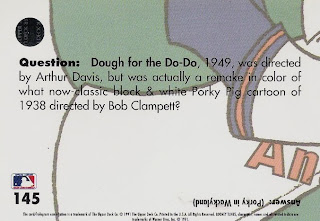 The highlight of Joe’s package is right here. A Flair Showcase Fresh Ink autograph! It is a sticker auto, but on a clear sticker so from a distance all you see is a beautiful blue sharpie signature. I have heard that Kaz is a good TTM signer, but I have never had any luck with him. He is a spectacular in-person signer. 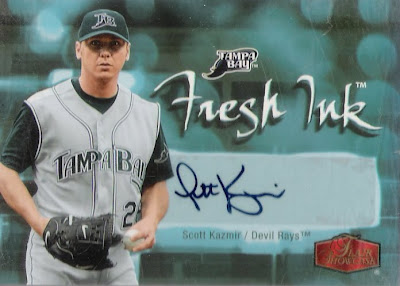 I remember he would sign on game day before and after warming up in the pen. I have watched him sign and he never puts his head down and just signs, he is always conscious of who is handing him things and I have seen him reach past adults to get to kids. I have also watched him stand there and sign for thirty minutes while engaging in chit-chat. I will also say that every time I have ever seen him, spoke with him or been anywhere near him I have felt awe. He has a presence about him and a star quality as well. I think that ultimately the Kazmir for Rodriguez trade will work well for both teams, but it sure was sad to him go. He was my teams first legitimate star, a real All Star, a league leader, a class act and a fan favorite. I wish him the best of luck in California and I hope for the best with Rodriguez in Tampa Bay. 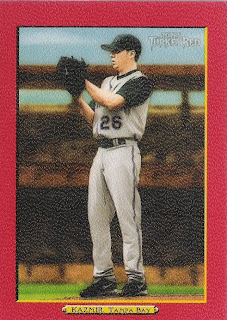 My Kaz collection is one that needs some serious organizing. I know I have at least 100 different cards of him, but they are by no means in order or even in a binder. This package may give me a little incentive. I was planning on showing off some Longos from Tampa Bay Sports Wasteland and some awesome new Rays from the Sewing Machine Guy, but I think I will leave this post as a Kazmir exclusive. Mainly because I am at work, its 11 PM and I have been writing off and on since 5 this afternoon, but also cuz I think Kaz could use his own post. He deserves it. After writing that last sentence, I do think he deserves it, but I wanted to show off one more card from Joe M’s package, this one of Jackie Robinson. 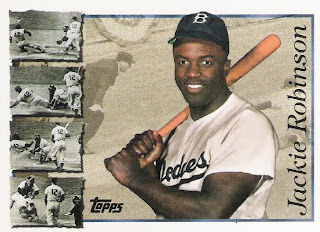 Thanks so much for everything Joe!!! You floored me with your generosity! Thanks to everyone who has blessed me with your kindness this week. I intend on posting everything, but I want to thank all of you and at the end of each post. I do also need to thank my favorite Minnesota Twins as well. Thanks Mr. Rhubarb Runner! I will end this post as I started it, with and shiny Kaz card. 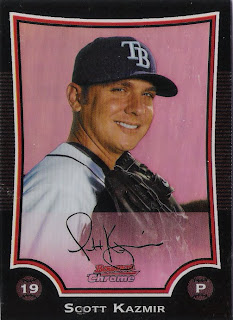 I do love refractors! I got my first blue refractor in the mail today, I can’t wait to scan that! Go Kaz! Go Rays! Troll out.
Posted by Collective Troll at 7:58 AM