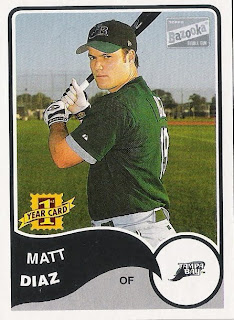 Matt Diaz was a local kid that the Devil Rays picked up in the 17th round of the 1999 draft out of Florida State University. He grew up in the Tampa Bay area and had attended Santé Fe Catholic High in Lakeland, Florida. He tore it up in the minors batting .383 at AA Orlando in 2003 and earning a shot with the major league club. He didn’t stick around, nor did he produce like he did in the minors and after parts of 2 seasons in Tampa Bay he never even approached the Mendoza Line owning a career average with the D-Rays of .167. Very surprising for a guy with a career average in the minors of .313 and a 7-year major league average of .310. I guess he blossomed when he went to Atlanta and took off as a pinch hitter. He batted .313 in 125 games for the Braves last year. Even though he never grew into his talent in Tampa Bay, he was one of my favorites to follow on the farm and I always knew he could be a big league hitter. It sucks that he couldn’t do it in Tampa Bay, but I am glad that the Braves recognize his ability. In 4 seasons with Atlanta he has batted .316, including a .338 mark in 2007. I think he has a shot to be their starting left fielder this year. Anyway, as much as I have always liked him, I never owned a single card of him in a Rays uniform. This is the perfect segue for me to show off my latest package of Blogger Kindness. This box of goodies came to me from Chris Harris from Stale Gum Dot Gum. Apparently even he reads my blog from time to time and had heard what happened to me. Well he sent a really nice sympathy card my way, which made me feel a ton better. He also sent about 300 cards, too. Obviously there were dupes in there, but it amazed me how many cards I needed or in many cases had never seen before. I wanted to post the Matt Diaz cards first, as I had never seen one of him in a D-Rays uniform before. 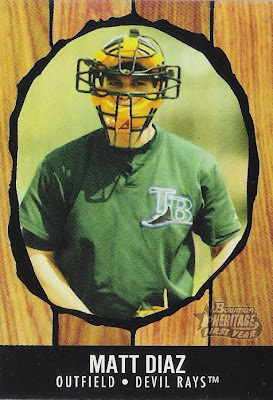 My favorite of the bunch is this 2003 Bowman Heritage-card #185 which shows someone, presumably Diaz, in a catchers mask. This strikes me as really odd because Diaz is an outfielder. That is what the card list him as and aside from a little first base, outfield is the only position he ever played as a professional. Bizarre. I owe a huge debt of gratitude to Stale Gum for this amazing box of blogger kindness and I look forward to posting many of them in the very near future. Thanks so much Chris! Go Rays! Troll out.
Posted by Collective Troll at 8:47 PM