My First Derby Card aka My New Favorite Card 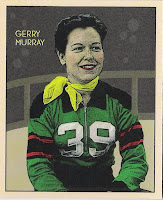 I have been running this blog for close to a year now (please hold your applause) and shortly after it started, I began listing my collecting preferences on the side bar. It lists the players that I follow and collect like Carl Crawford, Jason Bartlett, Brian Roberts and Carlos Pena from the present day as well as players from the 90s like Danny Tartabull and Quinton McCracken, on to legends like Roberto Clemente, Buck O’Neill and Larry Doby from the past. I am also a huge fan of baseball history, Negro League Baseball and Woman’s Baseball, too. I like cards and pictures of players wearing sombreros. These are funny, but as a Mexican American, I enjoy players having fun with a symbol of my heritage. The last line on my list of “Legends of the Troll” has always been “anything roller derby related”. Those of you who read this blog know I am a roller derby announcer, a huge fan of the sport and husband to a phenomenal skater. Up till now I have been able to collect a handful of old derby programs from the 30s and 40s and 60s and 70s along with some 8X10s. Most of these have come directly from former skaters that I have interviewed for a roller derby magazine. I collect a lot of things beyond baseball-mainly record albums, vintage and hardcore punk rock, early aviation memorabilia, vintage tattoo flash and piggy banks. Aside from that I collect, love and live roller derby. I have always assumed that there were derby cards made at some point and time. It was a massively popular sport. With all the different subjects for cards that I have seen, I figured roller derby must have got its due at some point and time, but the cards have always eluded me. Now I can say I finally own a roller derby card. Thanks to Sean, owner and operator of SlangKo Sportscards and author of the Condition Poor blog, I have a roller derby card in my collection. 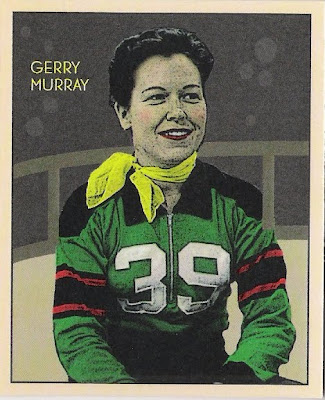 This comes from the 2010 SlangKo Sports Stars set; it is card #50 of 240 of Gerry Murray, who began skating in New York in the mid-40s. She was one of the early standouts of the sport and is a member of the Roller Derby Hall of Fame. Her son, Mike Gammon was one of the most famous male skaters of the 50s and on up till the 80s. This card is amazing! It has a colorized photo of Murray on the front-at the time this photo was taken teams did not have nicknames as they do today, her team was New York City and her battles against the squad from Brooklyn were legendary. 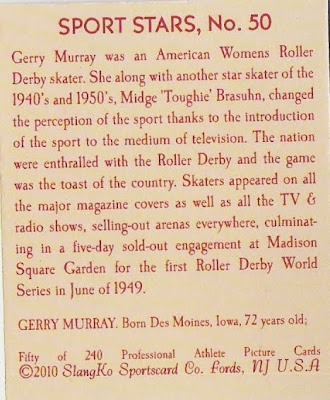 I have never had the pleasure of meeting Gerry Murray, but in any interview I have ever done her name comes up within the first two minutes. She is one of the most important figures in the sport. I would love to find more cards of her and other derby legends, but for now I am thrilled that SlangKo Sportscards has immortalized her on cardboard. Thanks so much for this amazing card Sean! Even with just one of 240, I do plan on chasing this set. I also plan on nominating SlangKo as best card company of the year. Topps is doing well, but SlangKo is AMAZING! I love my low serial number Carl Crawford and Jonny Gomes cards, but this might be my new favorite card. Go Rays! Go Derby! Go Bombers! Troll out.
Posted by Collective Troll at 9:59 AM