The Collective Troll Card of the Day

Not too much time today, but I wanted to get a card up. This is another one from the famous Wicked Vault… I have a lot of posting to do as My Past Time… I Love It! sent me a HUGE package last week and I am still not done posting the last one he sent… 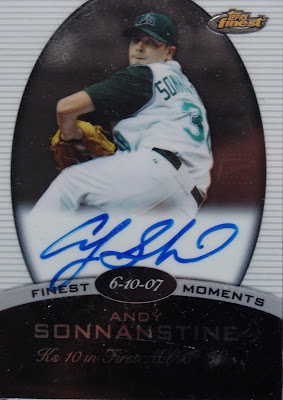 This card is from 2008 Topps Finest featuring a bold, blue, on-card autograph of Rays pitcher Andy Sonnanstine. Sonny is a personal favorite of mine. He struck out 10 batters for his major league victory on 6-10-2007. He won 13 games the following year when the Rays won the AL Pennant. Last year was a mess for him however and he spent the bulk of the year in AAA. This year he was in the race for the Rays starting rotation, but when Joe Maddon announced the rotation on Wednesday, Sonnanstine was the odd man out. That would have sealed Sonnanstine’s fate, placing him on the trading block before the start of the season, but an injury will put JP Howell on the DL to begin the season-that will make Sonnanstine a more valuable part of the pen and should keep him in Tampa Bay. That makes me happy and so does this card. Thanks again to my buddy Wicked Ortega for sharing and prepare to have your minds blown when I post everything he sent in the last package. By the by, there are a number of mindblowing awesome packages I need to post... Still not done with Stale Gum, Reds and More, My Past Time and oh my gosh, the package I recieved from Jacob Marley, THANKS!!! Go Rays! troll out.
Posted by Collective Troll at 12:41 AM