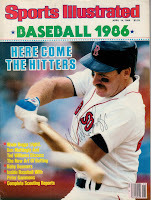 So yesterday the Bradentucky Bombers and I made the LONG road trip to Orange Park (Jacksonville), Florida. Five hours of driving time each way in the rain. Not fun. It was a great game. We played the Tri County Rolling Militia. That team included some friends of mine who skated for the Greater Jax Heart Attacks last year and it was great to see them. Fellow derby announcer Showtime from Tallahassee made the trip, too. He and I shared emcee duties and put on the halftime show. I had a good time working with him, he is a true pro. It was a nice tight bout. We held an early lead, but they broke the lead right before the halftime buzzer and took a 64-60 edge into halftime. They held on and stretched their advantage to 20 points and we took a tough loss. It was a sad ride home. Playing a game 5 hours away the day before you have to open at your job is difficult. I didn’t have to, but I did have an 8 AM class. Most of the girls on the team did. That is rough. Anyway, that is why I wasn’t around to post yesterday; I was in the back of a minivan for 10 hours or so. Blerg. Anyway, I am going to continue posting the gems that I received from Stale Gum. On this post I am going to start by showing off a few cards of Wade Boggs. To me Boggs is a Red Sox first, a Yankee second and a Devil Ray third. That is the order that he played for those teams and that is the level of his game. He was the BEST in Boston; he won a World Championship in New York. In Tampa Bay he helped usher in an expansion team with a little bit of credibility. He also racked up some personal career milestones. I don’t go out of my way to track down his cards, but here are 3 cards from Stale Gum’s uber-generous Blogger Kindness package that I really liked. Starting with an unnumbered die-cut card from 2000 Fleer. The card is cut like the number 3000 and celebrates August 7, 1999 when Wade Boggs hit a homerun for his 3,000th career hit. 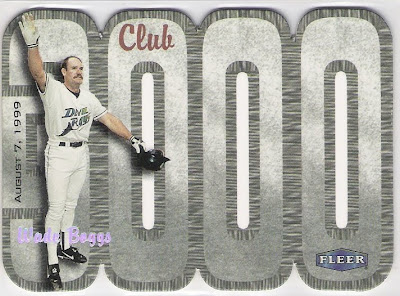 He was the 23rd player to join the 3000 club, but the FIRST to do it by hitting a homerun and the FIRST to reach the milestone in a Devil Rays jersey. Celebrating that same event is this insert from 2000 Topps Finest. 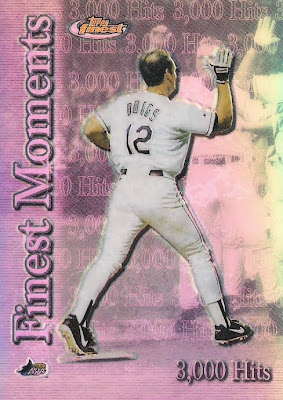 The card is number FM4; it is a REFRACTOR and shows Boggs without a helmet getting his high fives. Did I mention it’s a refractor? I LOVE refractors! Normally Wade Boggs is a man who should not remove his hat when cameras are present, but this card works. The last card I am going to show off is number 1141 from the hated 2009 Upper Deck 20th Anniversary collection. 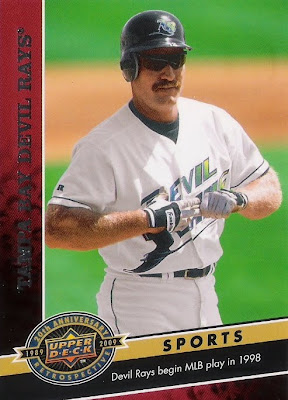 This card celebrates a different event that took place in Tampa Bay. On 3/31/1998 the D-Rays played their first game. Wade Boggs was there, as was I. They lost to the Tigers behind Wilson Alvarez, but gained a lifelong fan. Thanks so much to Stale Gum! The hits will be coming soon! Go Rays! Troll out.
Posted by Collective Troll at 10:36 AM