If you are a group box break participant OR a potential breaker, PLEASE READ THIS POST!!! 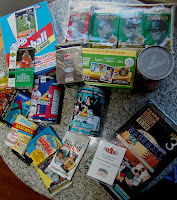 Okay, I am sure that I forgot at least 1 person here, but assuming I didn’t there are 12 open slots. I have purchased all of the wax for the break. I had said I was going to limit this one to 50 packs, but that didn’t seem like enough funs, so it is actually going to include 118 packs, totaling 1,481 cards. One pack of each product will be ripped on A Pack to be Named Later and additional packs will be opened here. Everyone involved in the break WILL GET EVERY CARD PULLED OF THEIR TEAM, but I will not be posting 118 packs. I will post at least 1 pack of everything. For the boxes of 36 I will post the first 12 packs I open and if something special is pulled after that, I will post that, too. The 24-count box will have 8 packs posted. The 8 pack blaster will have 3 packs. These are all minimum figures, but I am trying to get the point across that I won’t be posting every single pack. I didn’t want the break to only include 48 packs, I wanted it to be fun and have some variety, so I bought extra, but I know I won’t have time to post 118 packs, so figure on somewhere between 40-50 packs posted. Does this sound good to everyone? Please spread the word to everyone to PLEASE READ this post. The rip including all 118 packs is contingent to all slots being filled (there are 12 open) and it also needs to be read by all participants to make sure that no one objects to me only posting 40-50 packs. In the matter of the Heritage blaster, here is how it will be divided. The new teams (D-Backs and Rays) will be kept by me. Any multi-player cards will be mine. Nationals cards will go to the Expos slot. Any single player card of your team is yours. If I pull a Lou Gehrig autograph, it would go to Nico who holds the Yankees slot. If I pull an Albert Pujols jersey, it would go to Madding who holds the Cards slot. Does this all make sense? If you want to claim a team, do so here. If I forgot you, point it out here. If you have yet to pay for your team’s slot in the previous break, please contact me. Bacontowne at yahoo dot com is my email. Okay, that is all for now. Let’s fill those 12 slots. Oh... I wanted to end this post with a HUGE THANK YOU to Adam E from the Thoughts and Sox blog. He donated enough padded mailers to cover everyone for BOTH group breaks with some leftover. I was paying 69 cents per envelope, so Adam E saved me some SERIOUS money. That is a big part of why I added so much more to this break. I understand that Adam will accept "thank yous" in the form of Red Sox cards... THANKS ADAM!!! Now go read HIS blog! Go Rays! Troll out.
Posted by Collective Troll at 6:34 AM