Okay, I have officially hit anxiety attack time… I had totally spaced about school starting this week. I attended my first class today at 8 o’clock in the freaking morning! This might seem like nothing to most of you, but I work to 6 AM, so its pretty early because it means I have be up for over 24 hours and I am a little sleepy and very crabby and not quite ready to learn. The class is calculus. I have been putting off taking this for a while, but I figured that it was bullet biting time so I am gonna do it. During our first lecture, the instructor, Dr. R said this will probably be the toughest class any of you will ever take and I don’t expect more than 30% of you to pass this class. Wow, nothing like a little pep talk on the first day… He gave us homework, too, which also would not have been a huge deal except that I forgot about classes starting and I haven’t bought the stoopid 200 dollar text book yet. Anyway, this all factors into my blog writing because I have a self imposed deadline of Wednesday to finish the group break. I still plan on trying to do it, but the player descriptions are gonna get REALLY short. Sorry. I will plan better on the next one. Speaking of that, here are the teams that have been taken. The Blue Jays (Duane), Rangers (Brian), Red Sox (Adam E), Cubs (Paul), Yankees (Nico), Brewers (Ed), the Orioles (Ryan) and the Cardinals (Madding). That leaves the Braves, Mariners White Sox, Indians, Dodgers, Royals, Twins, Giants, Marlins, A’s and a whole bunch of other teams wide open. It will be mid 90s again so the Rays and D-Backs wont be available. I would like to get a few fresh faces in here… Okay, here we go with pack #15 of 1994 Pinnacle Series 2. I will probably post one of these at A Pack to be Named Later-a super amazing site that I highly recommend and am honored to be a part of. Please take a moment and go follow that amazing blog! Okay, here we go!

#433 Matt Brunson Detroit Tigers (Brunson’s Dad was Larry Brunson and that was enough I guess for the Tigers to use the 9th overall pick in the 1993 draft to take him out of high school. I think they dropped a million or so to get him to sign… Some notables who were still available included Derek Lee and Torii Hunter. Good scouting Detroit!)
#409 Brian Williams Houston Astros
#397 Rob Butler Toronto Blue Jays (Rob is the brother of Rich Butler (former D-Ray) and had a career about the same length)

#535 James Mouton Houston Astros (James is the brother of Lyle Mouton, but in this case James had slightly more success… He stole 20+ bags 3 years straight. I said slightly)
#302 Edgar Martinez Seattle Mariners (see really good hitters who didn’t play the field and are not in the Hall of Fame. Edgar had pretty bad years in ’93 and ’94 but came back to hit .356 in ’95. It would be the first of 7 consecutive years batting over .306)

#527 Chan Ho Park Los Angeles Dodgers (Park was just a 21 year old rookie who only pitched 4 innings back in ’94, but he’s still pitching…)
#337 Jose Mesa Cleveland Indians (Mesa became the Indians closer in 1995 and led the AL with 46 saves and finished 2nd in Cy Young voting behind Randy Johnson) 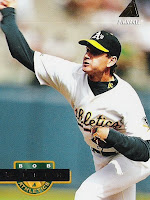 #425 Tripp Cromer St Louis Cardinals (Of the famous Cromer baseball family)
Okay, another pack down… These might get even shorter as I really need to try and hurry up a little more. I should be able to post at least 3 more packs today and might even touch on the AMAZING package I received this weekend from Adam E over at Thoughts and Sox. Oh speaking of new blogs (were we?) Troy, the famed Rockies collector has just started up a blog, it is called the Card Nut-go check it out please! Troll out.
Posted by Collective Troll at 2:59 PM