Before I begin, if you have not yet checked out the Super Bowl contest over at the Cobb and Hallady blog, you should. You can find it HERE-the contest is easy to enter and the prizes are AWESOME! Tell him the Troll sent ya...
Okay, the car (which won’t start) is keeping me real busy the few hours of the day that I am not in school or at work, but I am gonna post up a QUICK rip. Turns out these are almost ALL dupes, so it’s a really QUICK rip…Here we go with the 22nd pack of 1993 Topps Stadium Club Series 3:
#731 Mike Hampton Seattle Mariners
#692 Steve Decker Florida Marlins (Who’s behind the plate? Decker is the catcher!-See, it sort of rhymes...)

#661 Fernando Valenzuela Baltimore Orioles (After 11 seasons in Los Angeles the Dodgers released Valenzuela during spring training in 1991. He was picked up by the Angels, but was released by them after giving up 10 runs in 6 innings in his first 2 starts. El Toro spent all of 1992 pitching for Jalisco Charros in Mexico. He got off to a rocky start, but finished really strong and posted a 10-9 mark with a 3.86 ERA. He signed with Baltimore during spring training in 1993 and returned to MLB. He pitched decent in his one season with the Orioles posting an 8-10 record with a 4.94 ERA in 31 starts. He would extend his career until 1997 with 3 other teams. For his career El Toro was 173-153 with 2074 strikeouts) 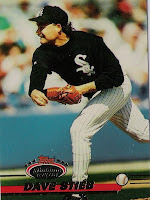 #641 Dave Stieb Chicago White Sox
#730 Jim Tatum Colorado Rockies
#720 Nigel Wilson Florida Marlins (The Ajax, Ontario native struck out 11 times in 16 at bats for the 1993 Marlins WITHOUT getting a hit)
#721 Mike Bielecki Cleveland Indians
#654 Ben Rivera Philadelphia Phillies (How many players get to share a card with a decapitated Pirate? This is among my favorite photos of this set. It is a rather unique shot for a pitcher. The 6’6” right-hander was 5-0 at the Vet in 1992. He was 13-9 in 28 starts with 1 complete game shutout overall in 1993 for the Phillies - I will have to post this one later, I don't have the image with me and can't find it online...)
#744 Guillermo Velasquez San Diego Padres (Like Valenzuela, Velasquez was born in Mexico and spent time playing there, too. Unlike Valenzuela his time in Mexico didn’t help him back to the big leagues. His career lasted just 94 games from 1992-’93 for the Padres. He did hit 4 homeruns for San Diego)

#674 Steve Reed Colorado Rockies (Reed went undrafted out of college, but signed on with the Giants organization after a non-roster spring training invite. He was picked by the Rockies in the 60th round of the 1992 expansion draft AND the submariner went on to be the Rockies most used pitcher and had a 15 year career. In 1993 he pitched in 64 games with a 9-5 record and 3 saves. He appeared in 833 games in his career which ranks him 37th All Time.)
#624 Bud Black San Francisco Giants (Black was in his 13th season in 1993 and saw use only as a spot starter, but he pitched great with all that extra rest going 8-2 in 16 starts)
#734 John Johnstone Florida Marlins
#742 Damon Buford Baltimore Orioles
#663 Mark Gardner Kansas City Royals (After the 1992 season the Expos traded Gardner to the Royals for Jeff Shaw and Tim Spehr. The Royals didn’t use him much and released him after the 1993 season and he returned to the NL with the Marlins. He was 99-93 over his 13 year career)
Okay, another pack down. I started and stopped this post about 100 times today-I began around 7:30 AM and nearly 11 hours later, here it is… I am work now, but I am outside and if my battery holds up I think I can finish Stadium Club off tonight. I have my fingers crossed anyway. The scans are going to be limited and so will the descriptions, but if you’re okay with it, I am okay with it. The 23rd pack is coming soon! Go Rays! Troll out.
Posted by Collective Troll at 5:53 PM