Thanks to everyone who is still with me on this never ending series of pack rips… It has been a seriously long day for me-first day of school after working a double, wah wah wah… I think this is the 6th post of the day for me, which is A LOT. My mother-in-law is having hip surgery today, I haven’t seen my wife in 2 days and none of these things make me very happy… I am happy that folks are reading (at least clicking on) my posts today and I love all of the comments. I had mentioned previously which spots were open for the next group break, which should begin about 2 weeks after this one concludes. Included in the available teams are the Dodgers, Mariners, Indians (claimed by Motherscratcher), Astros, Giants, Angels, Royals, Pirates, Reds, Rockies, Tigers, Phillies, Mets, Expos, Twins and probably a couple of others that I am forgetting. Anyway, if you want a FREE slot for one of those teams, read this post and comment with the best caption you can come up with for this card. Try and keep it in the realms of PG-13 if ya can and include in your comment which team you would like. Sound good? Okay, let the rip commence!
#343 Jay Buhner Seattle Mariners (Walk softly and carry a big stick, brand bat)

#457 Bob Walk Pittsburgh Pirates (Ah, pitchers with unfortunate names…)
#339 Roger McDowell LA Dodgers (If you are a Cubs fan and it pains you to pile onto poor Randy Myers, you may add a caption to this one as an alternative)

#360 Reggie Sanders Cincinnati Reds (I’m not gonna say this guy wasn’t good, but was he ever as good as you thought he could be? Oh, and I just realized his middle name is Laverne, like and Shirley…)
#276 Bobby Witt Oakland A’s 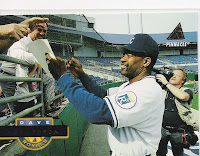 #508 Dave Henderson Kansas City Royals (There are literally 3 people in the stands and Henderson took the time to sign for all of them. Was the game in progress at this time?)
#356 Pedro Munoz Minnesota Twins

#509 Bo Jackson California Angels (Prior to this the only card I had seen of Bo on the Angels he was flying an airplane)
#417 Jeffrey Hammonds Baltimore Orioles
#446 Andres Galarraga Colorado Rockies (I’m not saying El Gato Grande is a Hall of Famer, but I was surprised that he got such little love. The guy came back from cancer!)
Okay, that’s it with this pack… Like I said, it has been a long day and I just can’t find the words right now, gimme something on poor Randy Myers, please! I will leave it open for 24 hours, so get on it!!! Troll out.
Posted by Collective Troll at 11:00 PM