The Collective Troll's Card of the Cold, Cold Night...

This card came to me via a trade a while back. I didn’t think much of it at the time, plus I was somewhat busy and backed up posting. It got buried and forgotten about every time I sent a trade package out to a Dodgers fan. I uncovered it during my organizational effort this past week and finally took a good look at it. The card came from the 2002 Upper Deck Heroes set and it features Davey Lopes of the LA Dodgers and Jim “Catfish” Hunter on the front. There is a little swatch of grey between the two with the label “Game Used-Davey Lopes” above it. The card is pinstriped which is odd, but it has decent action photos of both former All Stars on the front. It seemed a slightly odd pairing to me, so I flipped it to investigate. The back of the card states (underneath a gigantic CONGRATULATIONS) “Lopes appeared in his first World Series in 1974 and led the Dodgers with 2 steals, but the A’s prevailed in 5 games thanks to Hunter who went 1-0 with a save.” I do like Upper Decks optimistic view of things because to me, regarding Lopes in his first World Series the cup was definitely half empty. 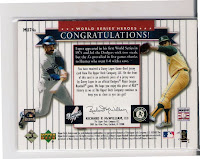 In 18 at bats he managed just 2 hits (.111) and did little to set the table for the Dodgers big bats. I don’t know if would have helped, barring Steve Garvey (.381) and Steve Yeager (.364) Bill Russell, Joe Ferguson and Jimmy Wynn were in a 3 way tie for the team lead in runs batted in with 2 a piece. I would guess this wasn’t too memorable a series for Dodgers fans. If Upper Deck just had a piece of Lopes shirt or pants or whatever lying around they could have highlighted the 1981 Series when Lopes stole 4 bases and the Dodgers actually won. Just a thought. Dodgers fan, this puppy is on the block… Troll out.
Posted by Collective Troll at 5:52 AM