As you can see creativity in these titles is done... Moving right along with the 1994 Pinnacle, here is pack #18-the end is near!

#366 Eric Plunk Cleveland Indians (Plunk had a respectable career, he was 72-58 in 714 games over 14 seasons AND he was traded for Rickey Henderson TWICE)
#531 Darrin Jackson Chicago White Sox
#309 Scott Kamieniecki New York Yankees

#345 Joe Carter Toronto Blue Jays (This is one of my favorite cards ever and not just because I am a Joe Carter fan… Look at the pic, Carter is making a GREAT catch at the wall, but there is a Yankee fan in the front row (thrusting at the fence) wearing a tee shirt with Babe Ruth or Melky Cabrera on it with a ball on his hat. Just look at the picture. Awesome!) 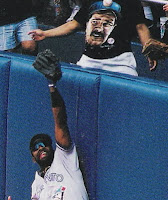 #520 Julio Franco Chicago White Sox (Wow, Julio Franco was just a 35-year-old young pup in ’94. He won the Silver Slugger Award for DH in ’94 after batting .319 with 20 homers and 98 RBI. He already had 4 as a second baseman which ties him for 2nd most All Time behind Ryno. I really would have liked to see Franco play at 50)

#315 Robby Thompson San Francisco Giants (Robby T pulled off the Trifecta in ’93-he was an All Star and won a Gold Glove and Silver Slugger at 2nd base for the Giants)
Okay, that’s another rip down… We are getting close-I still don’t think I will be done by tomorrow night, but I am gonna keep on trying! Oh, by the way, this is my 350th post, woo hoo! Troll out!
Posted by Collective Troll at 5:29 PM