Taking a quick break from the spring training coverage, here is a long overdue Three From Three of James Shields aka Big Game James. Shields was the Tampa Bay Rays opening day starter in 2009 and there is no reason to think he won’t get the same job in 2010. Last year he got off to a good start, but got frustrated with the lack of run support and defense behind him and finished with a 11-12 record, a drop off from his 14 win season in 2008. He has the stuff to be a consistent 15 game winner in the big leagues and with a little bit of run support, he can be an All Star. He hits the low-90s with his 4-seam fastball, has a great changeup and can be a legitimate ace. Beyond all that, he is the ONLY Rays pitcher that can say he won a World Series game. He brought a shutout into the 6th inning against the Phillies in Game 2 of the 2008 World Series. 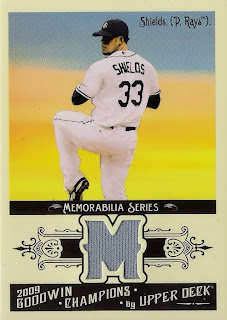 The first card I am showing off came from Cobb and Halladay and shows James Shields from the Goodwin’s Champions set WITH a jersey relic. 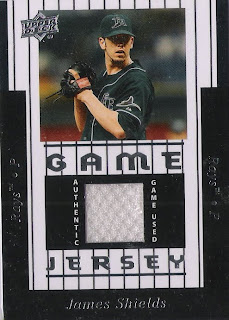 The second comes from Closet Full of Cardboard. This baby came along with 13 new Carl Crawford cards and a vintage Clemente. Its an Upper Deck Game Jersey card. The 3rd card in this 3 from 3 is my first and only Shields autograph. 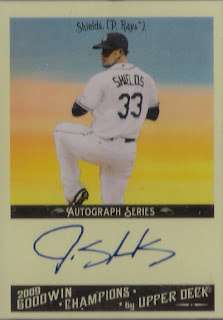 It is also from the Goodwin’s set and has an ON-CARD auto of Shields signed in blue sharpie. This one came from Mike of JDs Wild Cardz about 6 months ago. It was a total surprise and I almost crashed my car when I opened the envelope and saw it. The Rays Fan Fest is this Saturday! I can’t wait! Thanks to everyone for the great cards! It reminds ya how great Upper Deck was... I love this hobby, I love this game! Go Rays! Troll out.
Posted by Collective Troll at 12:23 PM