Greetings and good morning Trollites! Welcome to my 400th post. I wanted to do something special, but I have spent the last hour staring at this blank white page and I am not making any progress. I think I would like to pound out an epic post that stretches a country mile (I do love in the South), but I’m not sure if I have the energy. Writing up 82 pack breaks without a break has rotted my creativity. Plus class begins in 45 minutes and even though I type fast, I don’t type that fast. I think I will settle on a trade post. Unlike some people, I love trade posts. I think that trade posts are the foundation of our community here. I discovered at least ¾ of the blogs on my blog roll after seeing their link pop up in someone’s trade post. It wasn’t too long ago that my blog roll was only 6 site’s long. Now it has 180 different blogs on it. Most are about baseball cards, one or 2 are about roller derby, a few are about grammar (I am a nerd) and I even have a couple about hockey (which I don’t understand at all). Looking back eight months ago to the original “sensational six” blogs on my blog roll, all of them are still alive and kicking. One of them disappeared for 4 months, but now the Easy Life is BACK, make sure you check him out (again). One of the other original blogs on the Troll Roll was/is the Night Owl. The Night Owl won the Drewbie Award this year as the MVP of the Blogosphere, the best. I don’t dispute that title, I voted for him. And lo and behold, I happen to have a package waiting for me from the legendary Night Owl. You have probably been reading along with the Night Owl’s brush with a childhood hero. I am not too modest to take all the credit for introducing Mr. Reuss to Mr. Owl.

Yep, I hooked it up. I think that this package is my cardboard thank you for my blogger selflessness. Maybe it’s a thank you package for the Ron Cey rookie that I sent Mr. Owl a few months back. Maybe it is an advance thank you for all of the cool vintage Dodgers that I will be sending his way. Whatever it is, it will be AWESOME! How could a trade package from Jerry Reuss’ (and my) favorite blogger be anything but AWESOME? Okay, let me see what I got…
We are off to a good start… First up is a pair of awesome Perez Steele renderings of Willie McCovey and Cool Papa Bell.

These are from 1987, made by Donruss/Leaf and are from a subset called “Leaf Candy City Team Hall of Fame Greats”. Dick Perez’ art plus 2 of my favorites of all time equals AWESOME! Very nice. Next up is a 2006 Allen and Ginter base card of Carl Crawford. This was the last A&G base card of CC that I needed. Awesome. Next up, let’s see… More Rays I need? More Hall of Famers? More Negro League Legends? No… This is weird, a card with a note on it. The note reads “Oh no Nomo! You’ve been bipped?” WHAAAAATTT???????????

Is this card a harbinger of evil and doom or maybe, hopefully it just fell into my pack of cards accidentally. Then I saw these.

Next out of the envelope is this. 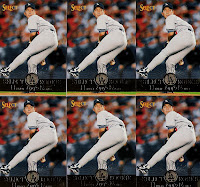 Then Followed by this and this...

In hideous Nomo fashion. I’ve been bipped. I’ve been bipped by my role model, by my blog hero, by my “friend”. This is my first bipping. I am left empty. I will probably call in Bip, I mean sick tonight. I am putting my pajamas back on. What are the docs prescribing for a bad case of the bips these days? I can’t believe that I dedicated my 400th post to chronicle an attack on myself. I can’t believe I have let this malevolent package intermingle with “nice” packages from GSNHoF, PatP, Padrographs, ILHMOSC and Field of Cards all this time. I hope none of them are infected. To you Mister Owl, you evil, evil nocturnal beast: This is NOT over. My innocence is gone. Mr. Nice Blogger is dead. It’s my mistake to trust a bird that sleeps during the day. Well my feathered friend, I would watch my nest if I were you. The rest of the package doesn’t seem to matter. Not after this cheap, classless, non-creative attack on me. Packaged in with these awful “Oh no Nomo” cards were a couple of very shiny Rays. A Carl Crawford X Fractor and a BJ Upton refractor, both from 2008 Topps.

Nice cards I guess. There were some very nice 1969 Topps cards in there, too. There may have been more cards in the package. I don’t know. I might check the fireplace later, but I am signing off now. I do apologize to my readers for the lack of scans. After scanning the block of 10 Nomo cards, the scanner exploded. Congrats to me on my (tainted) 400th post. I’m off to search for recipes for owl. It will be served cold. No thanks to the night owl (you are no longer capitalized). And no Shannon Stewart will not be associated with this post. (Wounded) troll out!
Posted by Collective Troll at 11:17 AM