Spending the Day at Pirate City With My Little Brothers... 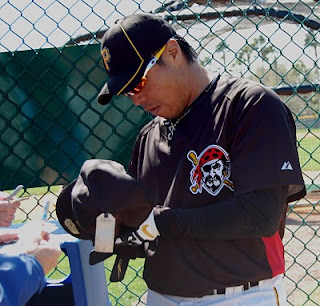 The local schools in my area had an admin half day today. That worked out awesome for me because I had the morning off from work. I wanted to check out some spring training action as I hadn’t been all week, but I figured I would leave the planning up to my little brother. On a side note, I would whole-heartedly recommend volunteering as a big brother or big sister to anyone and everyone reading this post. It is very rewarding and it’s just a fun thing to do. You can get more info from the Big Brothers national website HERE. Anyway, I called my little brothers mother last night and she confirmed that he wanted to go to Pirates camp. I asked if any of his friends wanted to come and a few hours later she called and asked how many kids I could handle. Well, I sometimes have a rough time taking care of myself, but when baseball is involved, I say the more the merrier! I knew we would have a crowd so I decided to rent a car for the day, went with a minivan, fortunately. When I arrived at lil bros house (we will call him Dan for the sake of this post) he had 7 friends with him. All of them had their baseball mitts and wanted to come along. We all piled into the car and hit Pirate City. I brought along all of the Pirates cards that I had and we split them up among the kids when we got there. I didn’t have too many current Pirates at all, but I had quite a few Akinori Iwamura cards, so every boy got at least 3 of them. 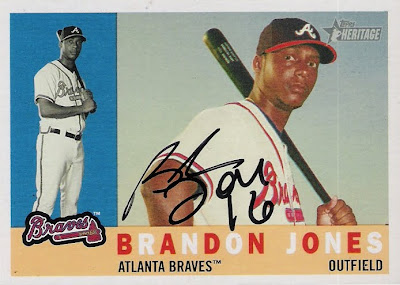 I also gave each one a ball (not official league, but they worked) and a sharpie magic marker. We all watched BP for a while and then went off to the side to play catch together. Chuck Tanner came by on his golf cart and pretended that he was scouting the kids. He posed for some pictures with them (which I won’t post here) and he signed some of the boy’s baseballs even though they had no idea who he was. After an hour and a half we stopped our game of catch and returned to watch the big leaguers take BP. That wasn’t too exciting for them because they didn’t have a great view of what was going on from behind the batting cages. The nice thing was that as each guy finished his round of BP, they came out to sign autographs for my boys. I only had cards for them of about 6-10 players each, but I bought “Dan” a gray tee Pirates tee-shirt and they each had baseballs, so by the end of the day each boy had at least 20 autographs. 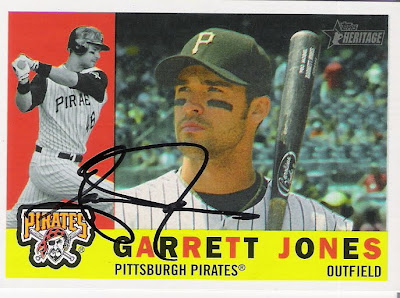 Not every player stopped to sign for them. They were most disappointed that Andrew McCutchen didn’t come over as he seemed to be the kid’s favorite. Bobby Crosby and Ryan Doumit both denied our requests as did most of the pitching staff. Some of the most friendly players and best signers included (fortunately) Akinori Iwamura, Ryan Church, Garrett Jones, Brandon Jones, Tony Sanchez, Ramon Vazquez, Steve Pearce, Lastings Milledge, Jonathan Van Every, Brandon Moss, Chuck Tanner and Javier Lopez. The two best signers were Ryan Church and Aki. I only had 1 Church card for each kid, but he signed all of them, plus their baseballs, shirts, rosters and then posed for pictures with each kid and then signed all of their gloves. I had 25 cards of Aki (all in a Rays uniform) so each boy got 3 and then after I dropped them all off, “Dan” gave me back 3 autographed cards-an Aki, Brandon Jones and a Garrett Jones (my other favorite Pirate). It made me want to cry. Seriously, it did. Aki was in more of a hurry than Church, but he did sign a total of 25 cards and pose for a group photo with the boys. His English was better than I remembered with the Rays as he said “how are you” to each boy. It was weird for me to see my one of my favorite Rays in another jersey, but I am glad that he landed on a team that appreciates him and he really seems to get along great with everybody. 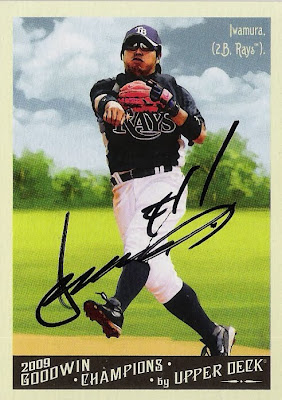 I am not very impressed with the Pirates staff, but offensively, I think they are a team that can get on base and manufacture runs. I want to thank “Dan” and all of his friends for a fantastic day. I think the two of us will ride our bicycles out to Pirate City again next week and once the games begin, we will go to one each week. There will be more on Aki the Pirate in my next post, stay tuned!!! Spring training isn’t going to last much longer, but if anyone has any cards of current Pirates that they can spare for my next field trip, I would appreciate it. These boys loved getting autographs of big league ballplayers, but other than “Dan” who has a binder full of cards from me, the other kids had never seen baseball cards before. The hobby is in a lot of ways too costly for most of the next generation and I would hate to see my favorite hobby dry up and go away, so please, send your common cards of Pirates and Rays over here! I will also add that when players like McCutchen snub their young fans, it doesn’t help the games popularity any either. Go Rays! Go Aki! Troll out.
Posted by Collective Troll at 11:55 PM