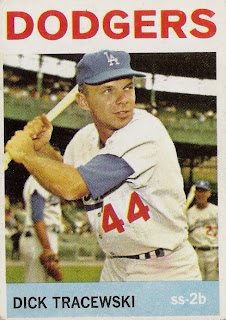 Here is another card from the 1964 Topps (regular sized set), card #154 of Dick Tracewski. If you are reading this automatic post, I am still likely at Pirate City, spending the afternoon with my little brother(s). They are not literally my brothers, but I am a volunteer with the Big Brothers and Big Sisters program and I always spend Thursdays with my little brother and this week he wanted to watch practice. There will be a long story to follow, but for now-enjoy a few more cards from the 1964 set. I opted to follow Aaron with Dick Tracewski, a light hitting middle infielder who spent 8 seasons in the big leagues-the first 4 with the Dodgers and the final four with Detroit. Tracewski wore the same uniform number as Aaron and this card shows it prominently. DT played for a much shorter period of time (15 fewer seasons) so naturally his stats aren’t as impressive as Hammerin’ Hank’s. Where Aaron swatted 755 career homers, Tracewski hit 8. Where Aaron topped the 300 batting average plateau 14 times, Tracewski topped the Mendoza Line only 4 times. He was a career .213 hitter. That said, where it matters most, Tracewski trumps Aaron. The Hammer earned his lone World Series ring in 1957 with the Braves. Tracewski won 4 rings over his 8 year career. With the Dodgers in 1963 and again in 1965 and he also won it all with the Detroit Tigers in 1968 and earned his final ring with them in 1984 while serving as their 3rd base coach. In 3 Series’ 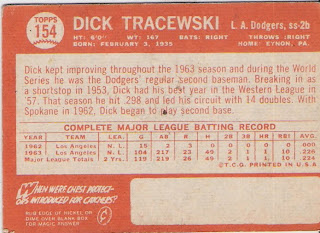 Tracewski appeared in 12 games and got 4 hits in 30 at-bats for a career .133 postseason batting average. Tracewski also sits in the history books having served more coaching time than any coach in Detroit Tigers history, spending 24 years as coach with them at the big league level. He is also one of the few managers in baseball history to go undefeated. He won 2 games as the Skipper for Detroit in 1979 without a loss. Sparky Anderson took over for him and did well (56-50) and the Tigers finished 5th in the AL East, but there is no telling how well they would have done if Tracewski remained at the helm. I love Hammerin’ Hank, but Dick Tracewski has him beat. I love this game, I love this hobby! Check back later for a full spring training update… Go Rays! Troll out.
Posted by Collective Troll at 5:36 PM