The National League's FIRST All Star Catcher is Finding...

This card would probably fit in well with Carl Crawford Cards’ “Catchers Finding Jesus” series of cards. It certainly appears that Jimmy Wilson is looking for something, divine intervention perhaps; there is no telling if he found it. He did find himself featured as the Collective Troll’s Card of the Day nearly 65 years after his untimely passing of a heart attack at age 46 in my hometown of Bradenton, Florida. Wilson moved there after his dismissal from the Cincinnati Reds coaching staff in 1946 to pursue a career in the citrus business, but he passed away the following May. 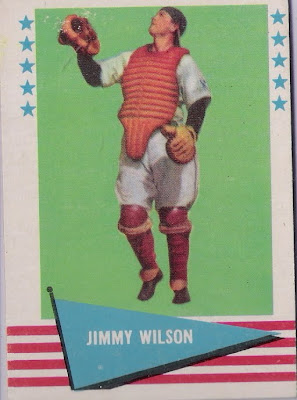 The card is from the Fleer Baseball Greats set from 1961. It is card #88 and shows Wilson in full catching gear.
Jimmie Wilson has several claims to fame as a player. Most impressive is he was the starting catcher for the National League in the first ever All Star Game in 1933. He batted 8th and was 0-1 before being lifted for a pinch hitter, Lefty O’Doul. Two catchers made the team as reserves; Bill Dickey and Gabby Hartnett, both of them are Hall of Famers. Wilson was the starting catcher in the Midsummer Classic again in 1935. This time he played until doubling in the 7th inning. He was lifted for a pinch runner. The NL lost both games.
Wilson, whose nickname was Ace, broke into the big leagues with the Philadelphia Phillies in 1923 after a successful soccer career. In 1928 he was traded to the St. Louis Cardinals in between innings while the teams were playing each other. He left one bench, swapped uniforms and landed on the Cards bench. He became an integral part of the St. Louis Cardinals Gas House Gang teams of the 30s. Along with Pepper Martin, Burleigh Grimes, Paul Derringer, Frank Frisch, Chick Haffey and Bill Hallahan-Wilson and the Cards won 3 NL Pennants and won the World Championship in 1931. Wilson didn’t do well at the plate during the Series, but he was a fine defensive catcher and the team won despite his lack of offense. Wilson was then traded back to the Phillies before the 1934 season. He served as the Phillies player and manager from 1934 until 1938. Even with future Hall of Famer Chuck Klein in his outfield, the Phils were among the worst teams in baseball at the time, but under his management they managed to not finish last twice.
He was recognized as one of the top catchers in the National League during his era, which was the deadball era. He set his career high with 6 homers in 1924. Over his 18 year career he hit 32 homers, an average of less than 2 per season. 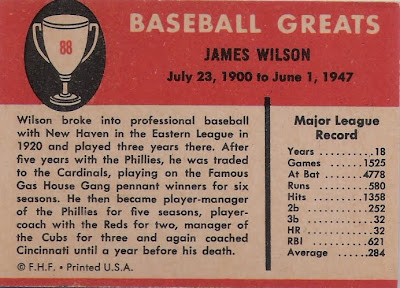 Wilson was released by Philadelphia after the ’38 season and he signed on with the Cincinnati Reds as a player (3rd string catcher) and coach. Wilson saw limited play in 1939, but in July of 1940 the Reds future Hall of Fame catcher Ernie Lombardi hurt his finger in the thick of the Pennant Race. His backup Willard Hershberger filled in admirably, but while on a road trip in August, he committed suicide in his hotel room. Jimmy Wilson activated himself and became the Reds starting backstop at age 39. The Reds won the National League Pennant and Wilson batted .353 in the World Series as the Reds beat the Detroit Tigers in 6 games. Wilson scored 6 times and even stole a base. His postseason heroics led him to get the job as the Chicago Cubs manager, a post he held from 1941 until the first week of the 1944 season. He then returned to the Reds as a non-playing coach. 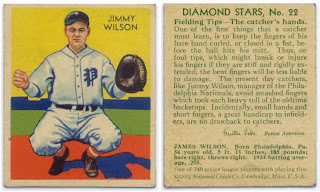 Wilson’s final batting statistics include 1358 career hits and a .284 average. He spent 15 years on the writer’s ballot for the Hall of Fame. His best year of support came in 1956 when he received 17 votes.
There is no telling if he ever found what he was looking for. He earned success on the highest stage in the game he loved and proved that he couldn’t live without it. As an end note, I believe that he may be the only person with the last name of Wilson to ever manage in the major leagues. Prove me wrong and win the card. Troll out.
Posted by Collective Troll at 7:30 PM