Greetings From Florida, Wish You Were Here!

I have received a multitude of emails this past week from folks who are jealous that they are shoveling snow while I am enjoying spring baseball. I don’t want to hog the experience, so I am doing my best to share it with you all. You are missing games of Simon Says, 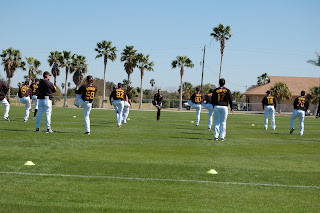 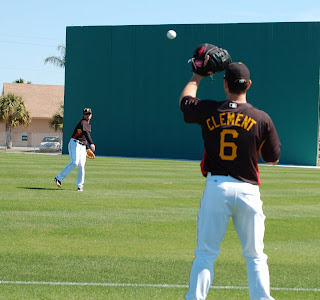 walking from field to field 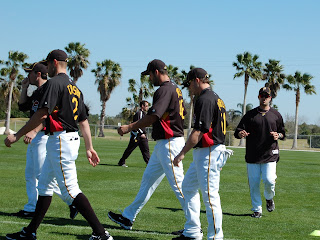 and on occasion, guys swinging bats. 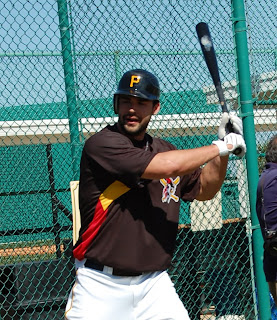 Some have asked about the autograph situation down here. Guys do sign for fans and I love seeing it. An interesting factoid about the Pirates-their longest tenured position player, in terms of MLB service, is Ramon Vazquez with 7.026 years over 9 seasons with 6 different ball clubs. I think he is a lock at the back-up utility infielder position as he can play all 4 infield spots well and he is a hustle ball player. 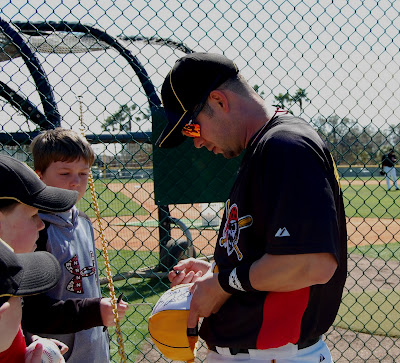 He is also a great signer, although he is not a household name, these kids acted like he was Albert Pujols when he agreed to give them autographs. I love seeing that.
Vazquez is one of the few returning Pirates players in camp. 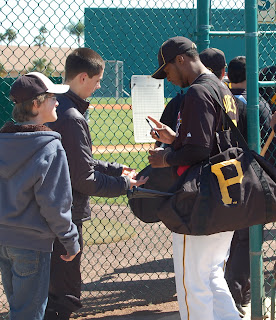 Most “veteran” Bucs were more than happy to sign for the young fans including the Jones’ brothers, but the newbie’s were more apprehensive. I had promised a list of guys who showed up early and here it is. I don’t have a complete list, but some of the names included Ramon Vazquez, Garrett Jones, 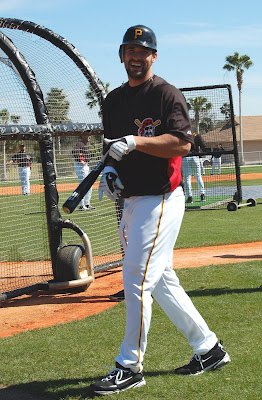 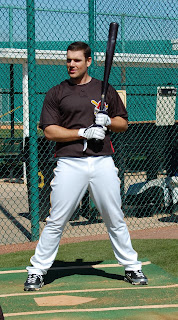 and the 2004 American League Rookie of the Year Bobby Crosby. 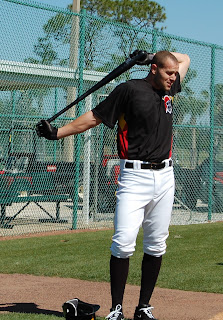 In chatting with Bucs manager John Russell, no job is guaranteed, and there will be a lot of competition this spring. At first base Clement will be battling Garrett Jones. In the outfield Andrew McCutchen will play center, but Brandon Jones, 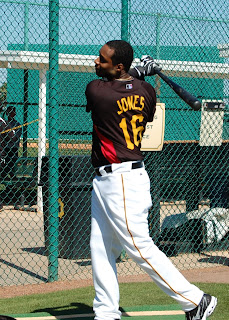 Lastings Milledge, Garrett Jones, Delwyn Young, Steve Pearce, Brandon Moss and Ryan Church will all be fighting over the other two outfield positions and/or first base. In the infield Iwamura and Crosby will likely take second and shortstop with Andy Laroche trying to hold off Pedro Alvarez. The pitching staff is an even bigger mystery...
As far as camp arrivals go, everyone was there except for Ryan Church, Delwyn Young, Andrew McCutchen, Lastings Milledge and Akinori Iwamura. You have to appreciate it when big leaguers show up early for work. These guys are ready to play and they want to play, that is a good thing. I don’t know where tomorrow will take me, but I will be watching guys playing catch somewhere… More on Garrett Jones to come. I will leave you all with a pic of a sweet piece of lumber. 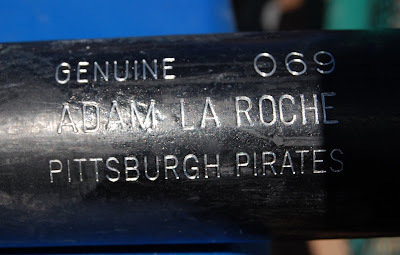 Beats the heck out of a relic card if you ask me… Baseball is back baby!!! I love this game. Troll out.
Posted by Collective Troll at 9:30 AM