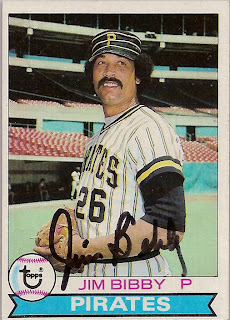 Spring training has commenced at Pirate City in Bradenton, Florida. Sad news of a former member of the family has brought spirites down. Former Pirates All Star and World Champion pitcher Jim Bibby died while in the hospital in Lynchburg, Virginia on Tuesday night at 65 years of age. Bibby broke into the big leagues in 1972 with the St. Louis Cardinals at the age of 27 after serving 2 years in combat during the Vietnam War. In June of ’73 Bibby was traded to the Texas Rangers and he pitched the first no-hitter in Rangers history that season, blanking the WS Champion Oakland A’s 6-0 while striking out 13 batters. After striking out in the 9th inning Reggie Jackson said Bibby threw the fastest ball he had ever seen. He recieved a $5,000. bonus for his historic no-hitter. He won 19 games for the Rangers in 1974 in 41 starts, including 11 complete games and 5 shutouts. He came to the Pirates and Pirate City during the spring of 1978 and was 8-7 as a spot starter and middle reliever for the Bucs. He was an integral part of the We Are Family team that won the ’79 World Series. He was 12-7 during the regular season and he started game 7 of the Series. He was credited with a no-decision, allowing a 3rd inning solo homerun to Rich Dauer. The Pirates won the game 4-1 and the Series. In 1980, at 35 years of age Bibby had the season of his career. He was named to the NL All Star team and pitched a scoreless inning. 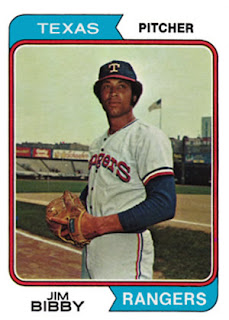 He finished the season with a 19-6 record, leading the league in winning percentage and finishing 3rd in the Cy Young vote. In 1981 he retired 27 straight Atlanta Braves. He allowed a leadoff single to Terry Harper, but was perfect for the remainder of the game-a 1-hit shutout. He had 2 hits and an RBI in the game as well. Over his career he hit 5 homeruns despite spending years in the American League. He spent a total of 6 seasons in Bradenton as a player with the Bucs. 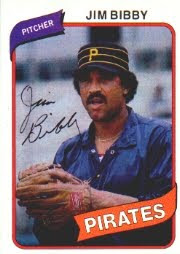 He retired in 1983 with a 111-101 career record. Over the years he has made many appearances at Pirate City during spring training. He has served as pitching coach for various minor league teams based in his hometown of Lynchburg. Jim Bibby was a hero in many regards, an excellent pitcher and a patient teacher. He will be missed by his family, friends and baseball fans everywhere. Thanks for the great memories Jim, you will be missed! WE ARE FAMILY FOREVER!
Posted by Collective Troll at 10:43 AM