There are 50 cards in the 1887 Allen and Ginter World Champions set. It breaks down as follows: There are ten baseball players, including Hall of Famers Cap Anson and King Kelly, which are the two most sought after and expensive in the set. There are 4 rifle shooters and two pool players, ten pugilists and seven billiards players. There are also 7 wrestlers and ten oarsmen. 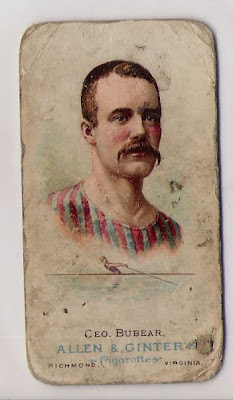 I would imagine that all of these folks are World Champions of some sort. These cards came in packs of Allen and Ginter cigarettes, one card per pack of ten cigarettes. My love affair began with one card that I inherited from my Grandfather, who got it from his grandfather. I figured I had one and only needed 49 more, so the chase was on. It hasn’t been quick, but I am about 20% of the way there. Today’s card of the day is from that set. It features George Bubear, a rower from London. I don’t know very much about Bubear, other than he was a competitive oarsmen who was winning prizes of $1,000.00 one-hundred and twenty years ago. 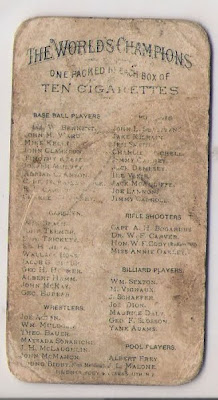 Honestly I can’t believe that I own any of these considering their age. It truly boggles my mind. It’s hard to complain about them, but the more I get, the more I wish that the back of the card had some kind of a description of the subject. They all just have the checklist on the back. Anybody have a Cap Anson that they want to trade? Go Rays! Troll out.
Posted by Collective Troll at 7:12 AM