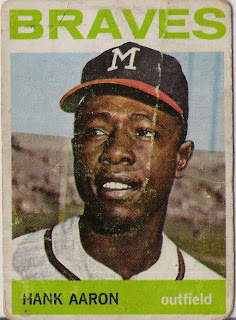 1964 has never been my favorite set, not even close. The white border at the top has always bugged me. I LOVE 1960, I like 1961, don’t care for ’62, love 1963, don’t like 1964, absolutely LOVE 1965 and I am indifferent to pretty much every set for the rest of the decade. Any time I get more than 9 cards from one year, I feel like I can chase the set. Doing that isn’t realistic unless those 9 cards include Mantle, Mays, Koufax, Gibson, Clemente, Yaz, Robinson, Kaline and Aaron. Seldom do my 9 cards ever include any of them. If I have less than 9 cards from a year, I generally trade them away. In the past few months I had to sell off cards from 1959, 1960 and 1965 and I traded away all of my ‘68s, ‘69s and ‘76s. Good news is they went to loving homes. I haven’t been going to the card shop very often, but I stopped in a few weeks back and he picked up a lot of ‘64s and offered me a deal on them. I had 8 ‘64s which I shipped out last month, so I was down to none. Actually that isn’t true, I do have some others, but they are all group cards (more than one player) and they go in a separate binder. 1964 was good for group cards. I need to get around to posting them soon… When I needed to find a card quick to be today’s card of the day, I grabbed for the 1964 pile. The card that is in the worst condition happens to be of the greatest hitter (by some accounts) of all-time. A guy who has never earned CotD honors from the Troll, mostly because I don’t have any of his cards, not because I am not impressed by 755 career homers and 2297 runs batted in. I am speaking of course of Hammering Hank Aaron, card #300 in the 1964 Topps set. The Hammer was coming off of one of the most impressive batting years of his career. He was the starting right fielder in the All Star game that year and he finished 3rd in the MVP vote behind Sandy Koufax and Dick Groat. He led the National League in homers in ’63; in fact, he hit his number, 44. He finished the year with 44 homers 4 different times in his 23 year career. 3 of those times it was good for the league lead. He scored 121 runs to lead the NL, it was one of 13 different times he hit triple digits in that category. He had 201 hits and batted .319 and led the NL with 130 RBI. 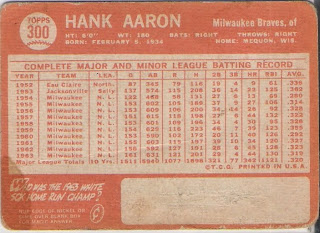 It was one of 11 times he hit three digits in that category. He also set a personal best with 31 stolen bases that year. Yep, he was a 40-30 man in ’63; the only time in his career he hit that plateau. He also paced the league in total bases, slugging percentage and OPS. The back of the card shows his career stats. He was only 10 seasons into his 23 year career, he had 342 homers and career .320 batting average. Not too shabby. Would I trade this card for a 1964 Topps Giants? Are you offering? I love this game, I love this hobby! Troll out.
Posted by Collective Troll at 6:46 AM